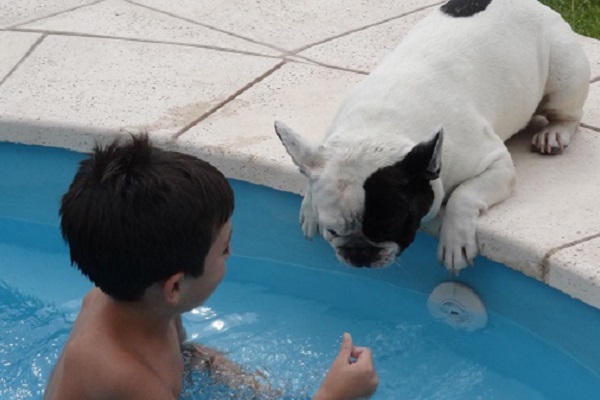 INDIO AND A CARELESS DAY AT THE POOL

The French Bulldog is a dog with few water skills. Indio, as his family calls him, is no exception; however, he enjoys playing at the edge of the pool. One summer day, when the heat was no longer so intense, he went out for a run around the garden where the entire family was gathered. He loves being splatters by the children! He was running to and from, barking, communicating expertly with those grape-shaped eyes of his. Does he like getting into mischief? He certainly does! Soon enough, he grabbed the goggles of one of the youngest between his teeth daring everyone to try to get them back. A mission impossible!
That afternoon, after shredding the goggles, he entertained himself playing with those splattering drops in his direction from inside the pool. Here water, there water. When someone went out of the pool, Indio followed him, always walking right along the edge, in quick step. In a split of a second, his paws slipped and he fell right into the water. He certainly came down quickly, really quickly, right to the very bottom of the pool, yet he showed no reaction, no attempt to come afloat, nothing… Facundo, with whom Indio shares his life, did not hesitate to jump into the water, clothes, sneakers and all, to the rescue.
Luckily, it was just a scare. Indio recovered quickly, yet, it took him a quite a while before he came close to the pool again.
We know the French Bulldog is not an agile breed when it comes to swimming, therefore, he should be accompanied to avoid unfortunate events. Also, rinsing him with fresh water after having gone into the pool or sea is convenient to avoid possible dermatitis.
Do you remember any pool-related experiences with your dog? Share it with us.